Delve into the adventures and dangers The Zoo has to offer with two complete series set in an alien oasis in the desert. Get both The Bohica Chronicles and Team Savage in this 7-book boxed set.

Kicked out of the military for brawling, what can three friends from different countries do to make some needed money?

With nothing in their future, Former US Marine Charles, ex-SAS Booker, and ex-Australian Army Roo decide to give the Zoo a shot.

Without the contacts, without backing, without knowing what they are getting into, they scramble to get their foot in the door to even make rent in one of the most dangerous areas in the world.

With high rewards comes high risk. Can they learn on the job, where failure means death?

Relying on their training, they will scratch, claw, and take the most dangerous jobs to prove themselves, but will it be enough? Can they fight the establishment and the Zoo at the same time?

And what the heck’s up with that puppy they found?

Go up and click on the 'Read Now' button and enter The Zoo where every day is a fight for your life. 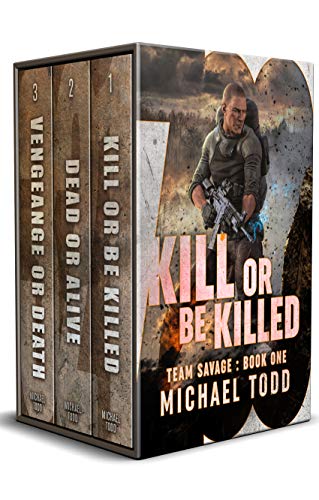 Not too much to say about me. I'm ex-Army, ex-Marine, ex-married, now living my retirement in Thailand.

I'm a whale reader, constantly in a book, and I wanted to see if I could write a novel. They say write what you know, so I wrote BECOMING A MAN IN THAILAND. The book contains some nightlife scenes, and the Thai government doesn't always take kindly to that, so to protect my retirement visa, I chose a pen name.

I'm also a beta reader for several other authors, and that opened up the chance for me to write with Michael Anderle and Jonathon Brazee in THE BOHICA CHRONICLES. I am a retired Marine infantry colonel and now a full-time writer living in Colorado Springs with my wife Kiwi and twin baby girls, Danika Dawn and Darika Marie. I am a two-time Nebula Award Finalist, a Dragon Award Finalist, and a USA Today Bestselling writer.

My undergraduate degree was earned at the U. S. Naval Academy (Class of 1979), and I have attended graduate school at U. S. International University and the University of California, San Diego, earning a masters and doctorate. I am a lifetime member of the Disabled American Veterans, the Veterans of Foreign Wars, the US. Naval Academy Alumni Association, and the Science Fiction and Fantasy Writers of America where I'm serving as the chairman of SFWA Ed, our professional education program.

I have rather eclectic tastes. I have won awards in photography, cooking, writing, and several sports, earning national championships in rugby and equestrian events. When I'm not writing, I'm reading, cooking, going to the gym, or traveling. I attend quite a few cons over the course of a year, and love meeting other people who love books.

I write because I love it. I only hope that others might read my work and get a bit of enjoyment or useful information out of my efforts.