Six new treats to delight you this week!

A new series is making its way to you this week, making the new releases an extra special treat! And next week, we're going to have a week full of FREE treats for you in the form of free books. We figured we'd continue the tradition from previous years this year and I have some exciting books lined up for you.

As you may have heard, LMBPN lost one of our staff members this weekend. She was a steadfast member of our social media team, audiobook team, and was a friendly face to all. She even wrote some poems in our Fans Write books. ​​​​If you're inclined, keep Micky's family and friends in your thoughts and prayers. She will be missed.

But she'd also tell me I need to tell you all about the books this week. I have 6 fantastic books launching this week and one is already out this morning That makes for a great start to the week. 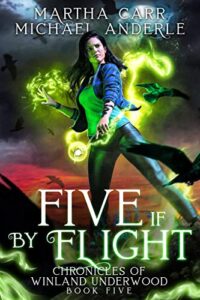 The least of which is the citizens were able to capture the Silver Griffin traitor, Erickson, without her.

But more refugees keep arriving, and the town is expanding. Erickson wasn’t the only threat to everyone’s safety.

Can the young witch leave them alone while she searches for her mother? Or will a hidden menace move in while she’s gone?

Hector Fang has a plan of his own and it involves Winland. Good or bad, he has a thing for Winland and he hopes he can convince her to join him.

Then there’s Erickson. He can’t be contained in a jail forever. Winland hopes to get answers from him, but will she like them?

The story she’s built about her life may be unraveling. Can she believe anything she’s told?

The Fixer’s daughter will have to decipher the truth from the lies herself and hope they lead to her mother or the warrior witch. And if she’s lucky, they’re one and the same. 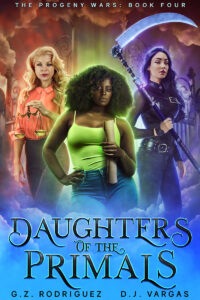 Therion, the Son of Destruction, is dead.

Without the offspring of Diablos, the Nephilim hordes have gone dormant and Angelica and the Daughters of the Watchers have had three years of blissful living.

Their careers have advanced. Their relationships have blossomed. Everything is coming up aces for the women.

Until the status quo is unexpectedly upended by a new threat.

An entity more powerful and deadly than any they’ve faced before is hunting down the Daughters of the Watchers one by one.

The Daughters scramble to identify this mysterious terror and why it’s hunting them. They discover that their given abilities and gifts are useless against this new adversary.

Their only choice is to depend on allies old and new who have tapped into much a greater power—the power of the Primals.

Have they rested on their laurels for too long? Can they trust these enigmatic new powers?

Meanwhile, old enemies are emerging from the shadows to take advantage of the Daughters’ preoccupation with staying alive.

The King of the Abyss had remained quiet for the last three years. However, Diablos’ diabolic plans have reached fruition, and the Star of Nimrod are preparing to expand their hybrid-hating message.

Will Angelica and her allies be able to contend with adversaries new and old while maintaining their newly found peaceful lives? Or will it all come crashing down as they fight a battle that they are ill-prepared for? 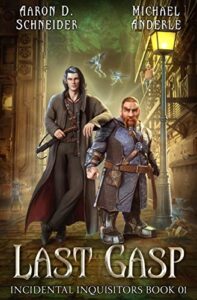 Being a cop in the only nonhuman city in the world is tough.

You’ve got magical and mundane crimes, standard and supernatural perps, and as always, plenty of paperwork for both.

The different groups don’t often mix. Elves have elvish problems, goblins have goblin problems. Everyone takes care of their own.

But with the rest of the world going to hell, literally in some places, this divided city has to change.

Enter the Inquisitors, the first arm of the integration initiative to make a stronger, better Quadras.

Spearheading the Inquisitor program are two cops who’d rather be anywhere but with each other.

Doughas Ruiridh is an old warhorse from the Dwarven Quarter hoping to retire already. Esselliar VorKluvaith is a hotshot elf investigator looking to bust corruption, unfettered by a partner.

They must find a way to work together and trust each other because something big is coming.

Malicious factions are growing like cancers in the city, and their schemes could cost the lives of thousands.

The Inquisitors will have to make this partnership work if they don’t want the city’s next breath to be its last. 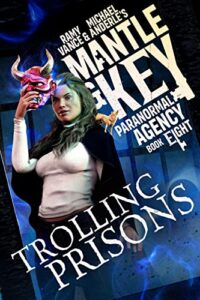 Maine is in prison for a crime she didn’t commit.

For once, the prisoner’s cry of “innocence” is true. She didn’t do anything wrong.

Being there of her own free will doesn’t change the fact that she’s locked up in a mythical prison, surrounded by the worst of the worst.

Disguised as an oni demon, Maine hopes to find the key to Chaos’ realm.

That key could be Earth’s last chance of survival, and it’s being held by the creature who killed her father.

Turns out mythical prisons are just as gang-ridden as human ones. Except here, people don’t use a shiv. They use a fireball.

Can Maine survive prison politics and terrible food long enough to find the key? Or will she be metaphorically stabbed in the back in the form of a disintegration spell? 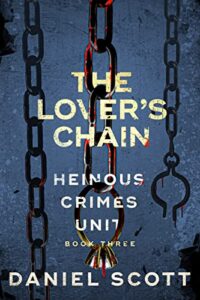 Til death us do part…

The Heinous Crimes Unit stopped Lucy Speckle’s murder spree. Brilliant FBI agent Christian Windsor was there. He watched as she cut her own throat.

Pushing Lucy to suicide has changed Christian. He’s becoming darker, harsher, crueler, and those around him are starting to notice.

Luke Titan couldn’t be happier because he engineered the whole thing. Too bad his genius keeps him hidden in the shadows.

If anyone knew Titan’s true intentions, he’d spend the remainder of his life locked up before getting sent to the electric chair.

However, his diabolical plans are almost complete.

Titan is done hiding, and he’s ready to rip the FBI apart.

The stakes are raised when a new serial killer emerges. The newcomer is kidnapping women, and only Christian notices. Driven by his relentless mind, he’ll do anything to catch this killer—even if it means breaking the law.

The only question is: What if there is no murderer?

There’s a very real possibility that the killer only exists in Christian’s mind, and he has no idea he’s being played by his psychopathic partner.

Don't stand outside, looking in. Pull up a chair and sit down. Luke is more than ready to welcome you back… 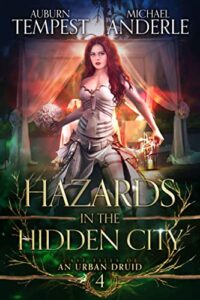 A wedding on an enchanted island of magic. A guest list of gods, immortals, shifters, dragons, and druids. And a sentient city waking after centuries…

What could go wrong?

When Fiona’s magnet for mayhem weighs in on her special day, there’s no escaping the fallout…or the island.

With Dark invaders, realm refugees, a feral vampire, and the mystery of the Light Weavers’ disappearance to solve, Fi and her friends are fighting on multiple fronts.

Book four in the Case Files of an Urban Druid series, Hazards in the Hidden City, brings you a hilarious, family-filled free-for-all with your favorite Clan Cumhaill characters.

Loving father, husband, and hard-working foredwarf Harlun, is just trying to do his job. Something is brewing in his town however that might make that task difficult. Discover what in Last Gasp!