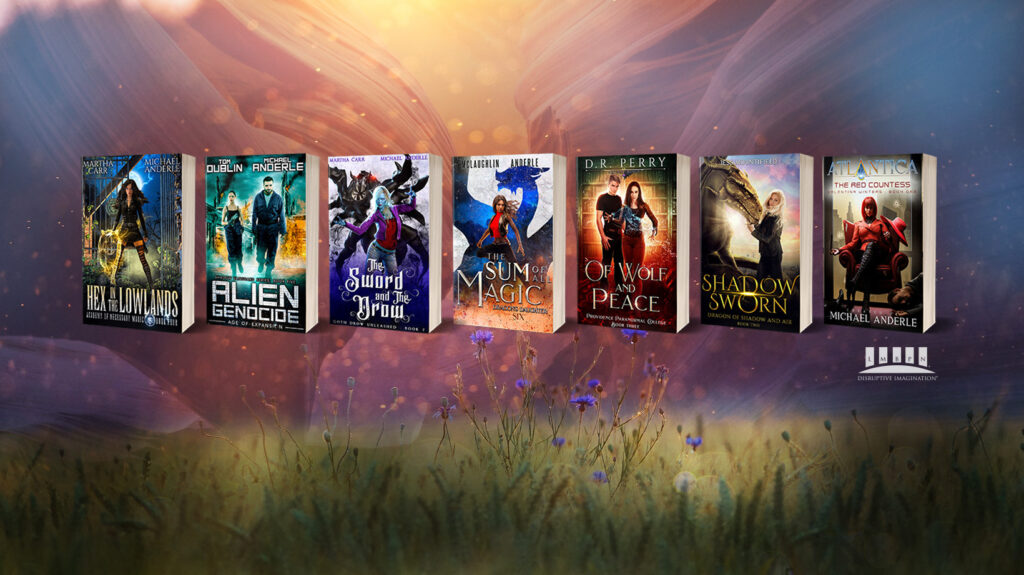 The summer is creeping up on us, and we have tons of new books to read!

Hex in the Lowlands:

Amanda Coulier has made it to the second half of her sophomore year at the Academy. The young shifter is itching to get out there and hang with her friends, learn more magic, and get better at using her claw and fang talents. Too bad because she’s got a lot of waiting around to do. Too bad she’s not going to. The potion she needed has properly aged, but Fiona is nowhere in sight. A sip won’t hurt, right? And the teachers are giving mixed signals asking for help and abruptly changing their minds. Signals get even more crossed when lesson plans are altered. Is patience the best answer? You know that answer! Amanda is a ward of Johnny Walker. Waiting around for answers is not part of the family motto. There’s a rumor of mutated Oriceran creatures and Amanda may have a lead. Time for the shifter to use her ghost wolf to find answers.​

Either the Enkelites are going to die or the Onbir. The Shadows fight for a third option. Displaced from their home by a war fought over their planet, the Enkelites become refugees, under the Federation’s protection. They find a new home with no life, but there’s a machine that’s being tested. A terraformer. The Shadows arrive to help set things up, but nothing is ever straight forward. An eco-terrorist is waiting for them, one who they’ve met before, and they didn’t like him then. The planet is cleared, or is it? The action starts as soon as they drop their guard. Can Adina reconcile the werewolf within? Has Tc’aarlat found love? Will Jack keep the team together? Who is Zorxia and why does she matter? Alien Genocide is the fifth thrilling adventure in the Age of Expansion’s Shadow Vanguard series. Grab your copy and dive into the action today! On a sad note, Tom Dublin passed away after he’d written the first three books and outlines for several more. We’ve undertaken writing these books for him. We (LMBPN Publishing) are donating one hundred percent of the profit from these books to Tommy’s family.

The Sword and the Drow:

Cheyenne's passed her Drow trials but there's one more step to claim her legacy. ​The secret contained in the heart of Ambar’ogúl and a coin placed on the Crown's altar. But not without her father’s help. Will L’zar Verdys risk everything for the daughter he just met and the throne he never wanted? Cheyenne will have to take a trip to the other side to see the destruction in L'zar's world to learn more about him and the rebellion. L'zar's rebels are ready to fight to stop the coming war and the creeping blight and they need Cheyenne to join them. Will her halfling blood be the edge they need? It’s a race to the finish against an entire royal army. What will be Cheyenne’s destiny? Become the Drow Ruler and fulfill the legacy her father left behind or death?

The Sum of All Magic:

After millennia of slumber, the goddess-dragon named Tiamat has returned to Earth. Her first move is to consolidate her power by taking down the Dragon Council. Her next?” Well, complete world domination seems like it’s on the menu. Kylara barely survived her first encounter with Tiamat. Only thanks to her friends and allies did she escape at all. She’d rather do just about anything than face this foe a second time. But she’s the only one who’s ever stood against the goddess and lived to talk about it. She’s the only being with the raw spectrum of abilities to have a chance of doing it again. If she fails, she and her friends are doomed. Which means losing is not an option. The dragon’s daughter is going to war, and heaven help any gods or goddesses that get in her way!

Of Wolf and Peace:

If you don’t own your mistakes, they’ll own you. Wolf shifter Josh Dennison shouldn’t tempt coincidence, or he’ll end up ill-fated like his missing brother and maimed sister. The wolves pledged neutrality when the Goblin King and the Sidhe Queen split up centuries ago, but he’s falling for the one woman he can’t have—a Kelpie whose magic comes straight from the Goblin King’s court. Nox Phillips has hidden on campus since she undid the Queen’s punishing spell. When she and Josh work together again, their mutual attraction can’t be denied. But for any favor shown to one Faerie court, a price must be paid to the other, and the pair already walk a thin line. Nothing can erase Nox’s guilt or prevent the Sidhe Queen from putting her on trial. How far will Josh go to save her? “I spent more than a couple of late nights reading through these stories to find out what was going to happen to my new friends!” – Michael Anderle, Best-Selling Author of The Kurtherian Gambit This series is for fans of Harry Potter, Jaymin Eve, and all academy books.

All things come to an end. Hiding in the shadows works for Aella and her dragon for a while, but dragons grow. With the world still in the dark about the existence of anything mythical, Aella must try and keep out of sight. But she’s living in one of the busiest cities in the world. Is LA really the best place for a dragon and an elf? There’s also a price to staying out of sight when the rest of the world can do as they please. Can Aella and Zephyr truly ignore other mythical creatures and the agents who hunt them?

ATLANTICA—the forgotten isle, the glittering gem in the cesspool of humanity's future. Anything you do inside your own home is allowed. It is a dog-eat-dog world of millionaires and billionaires. The rest of society beneath them live in ignorance. Those at the top have money, tools, people, assassins and murderers. One such assassin was a rumor, a myth, a ghost in the night. The Red Countess, the lady Valentina Winters. A player amongst the elite has something Valentina wants, and she is willing to do most anything to get it. Including his jobs. Theft of secrets, acquisition of passwords, perhaps a death or two if need be. That's power others in the hierarchy fear, and where there is fear, there are opportunities. When you play with an assassin, you had better be sure you don't get bit. Do those who desire Atlantica's secrets really care?  It's all fun and games until the bodies start dropping. And that is fun so long as the bodies aren't theirs.